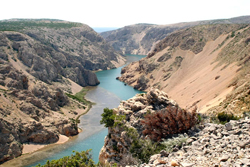 The Zrmanja River delights with its crystal clear waters wending their way through an imposing, 200-metre-deep canyon before merging with the waters of the sea at the town of Novigrad. The upper reaches of the river abound in travertine waterfalls, both large and small, among which the most attractive is the 11-metre-high Veliki buk, while Jankovića buk, bedecked with the striking remains of old mills, is a popular area for excursions. Sailing from Starigrad-Paklenica, Novigrad – an ancient fishing settlement situated at the very mouth of the river – is worth a visit, as are the fortifications of the Kurjaković princes above the town of Obrovac, which is also situated on the banks of the Zrmanja River.

The most interesting tributary of the Zrmanja River is the Krupa. The attractive locations on this stream, like, for example, Deveterac, a large, grass-covered travertine barrier, can be reached by road from Starigrad-Paklenica. The barrier takes its name from the nine travertine cascades that culminate in a 13-metre-high waterfall. Way back in the 19th century, an industrious craftsman constructed the well-known dry-stone Kudin Bridge here, with 12 arches built from travertine blocks placed on the same number of stone columns.