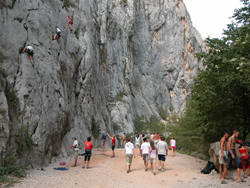 Paklenica National Park is located in Northern Dalmatia near Starigrad Paklenica and Zadar. The said includes two canyons named Mala Paklenica and Velika Paklenica. The Park covers the southern part of the slopes of Velebit and is located between sea and mountain, has an area of 96 square kilometers and its highest peak is Sveto Brdo (1753 m above sea level). The Velika Paklenica Canyon is 14 km long and between 500 and 800 m wide, while the perpendicular rocks rise up to its sides until they reach 700 m. The most attractive part of the canyon is the area around the creek that is reached by walking against the current from Anića Luka: high cliffs rise above the stream and form the narrowest part of the canyon.

The Mala Paklenica Canyon is 12 km long and 400- 500 m wide, and the boundary rocks rise up to 600 m. The pass between VelikaPaklenica and Mala Paklenica is very difficult, formed by karst rocks and spurs.

In the central part of the Park are the mountain resorts of Borovnik and Crni Vrh, along with Mala Močila and Velika Močila: Velika Močila is a valley shaped like a basin and is located 850 m above sea level near the Crni Vrh peak (1100 m above sea level). Skiljina Kosa (1015 m above sea level) and Zeleni Brig (842 m above sea level), while Borovnik, is located in the southern part of the Park. The eastern part of the Park is very different, wild and inaccessible, but advancing towards the east it transforms into an area with milder forms around two karst plains named Malo Libinje and Veliko Libinje, with numerous wells. The highest area of ​​the Paklenica National Park is the narrow summit of Velebit, 1 to 3 km wide, where the highest peak of the Velebit massif is located: Vaganski Vrh 1757 m above sea level. The most typical forms of the National Park are located around Bojinac, Vidakov Kuk and the highlands around the two canyons: there are numerous karst forms formed by the intense action of the water and by the temperature changes during the different seasons.

To see in the Paklenica National Park

The Paklenica National Park is the ideal place for those who enjoy walking and climbing. At the entrance of the Park towards the Velika Paklenica canyon there is an impressive vertical rock that bears several climbing tracks, further ahead the rapids of the Zrmanja river's upper course are ideal for rafting and canoeing, while those who love cycling will surely be attracted by the numerous cycle paths. The karst environment also abounds with numerous caves and quarries: among these three are nearby and can be visited - Manita Peć, Modrić Spilja and Cerovačke Pećine.

Paklenica National Park is known among mountaineers all over Europe especially for the vertical walls of the Velika Paklenica canyon, over 400 m high at the entrance to the Park, only 2 km from the coast and it is not unusual for the Paklenica Riviera to be chosen as a holiday destination for climbing lovers with children: it is also not unusual to see a part of the family enjoying the beach while mom or dad try their hand at climbing. Climbing guides are available at the park management.

In the upper part of the river Zrmanja you can practice rafting and, when the water level drops during the summer months, canoeing and kayaking are available as well.

The area of Mount Velebit with its karstic structure abounds with caves and quarries and expert guides can be contacted for an exploration of these treasures. We recommend a visit to the Manita peć cave, the Cerovačke caves, near the village of Gradac, both visited by tourists.

Trails and itineraries for walking:

The walk is the only way to get to know Paklenica. The Park area has more than 150km of trails and routes ranging from the more touristic ones that lead through the canyons of Velika and mala Paklenica, up to those designed for mountaineers who lead at the highest peaks of Velebit; Vaganski Vrh (1,757m) and Sveto Brdo (1,753m). Here are some of the most visited trails:

Two-hour walk on a 400m drop in altitude where you can visit the Paklenica mills, the Velika Paklenica Canyon, karst phenomena, streams with waterfalls, climbing areas, the Anića Kuk rock, the Lugarnica forest shelter, the mountain refuge at the foot of the mountain villages of Parići and Ramići.

Route Velika Paklenica-Anića luka – Manita peć, can be covered in an hour and a half on a difference in altitude of 450m, the trail offers a spectacular view of the cliffs of Anića Kuk, Jurasova Glavica and Manita Peć and the Manita Peć cave.

Route Velika Paklenica - Paklenica mill - Paklarić Fortress – the itinerary that can be covered in about an hour on a 120m drop; the route touches the old mill, the belvedere overlooking the sea and the mountains, educational panels with information on the territory, the flora and fauna, karstic phenomena and the Paklarić fortress.

Route Park Entrance –Velika Paklenica - Anića Luka -Grabove doline -NjiveLekine- Mala Paklenica-Seline, difficult path lasting 6 hours with a vertical drop of 650m from the park entrance to reach the Velika Paklenica Canyon, through the woods of black pine and beech, the well of Vodarica, the Kapljarka cave, numerous karst phenomena up to the canyon of Mala Paklenica.

The Paklenica National Park is a real phenomenon; if you decide to visit it, you won't regret it.