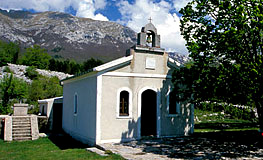 The lives of the local inhabitants of the Paklenica Riviera are deeply intertwined with the mountains. Velebit hides many villages where you can experience the magic of the native cuisine, and in some villages you can spend your entire vacation in the spirit of past times.

The history here has left many trails: rich artefacts from times of antiquity, the Paklarić and Večka fortresses from the times of the Turkish attacks, the Early Croatian Church of St. Peter, as well as the mirila, the stone monument markings connected to the former funeral customs of the local population which is a unique phenomenon of this region.

The Church of St. Mary – a votive sanctuary where there is a traditional pilgrimage on 15 August, the Feast of the Assumption, stands on Veliko Rujno, the highest Velebit plateau.

Situated on the very tip of a cape with the most stunning of the Starigrad beaches, the "Kulina", on the edge of Večko polje (Večka Field). It was likely built as a watchtower in the late Middle Ages (14th to 16th century). However, according to the legend of King Pasoglav (King Dogshead), the tower was a royal court.

Defensive fortifications of drystone (stone walls without mortar or other binding material) known as GRADINE (hill forts) were built in the Bronze and Iron Ages on rocky hilltops and prominent Velebit ridges. They served as shelter for the populations of the surrounding hamlets when danger threatened, while some may have been permanent residences inhabited by powerful locals.

Today they are in ruins, but in places one can still make out ring-shaped embankments up to several metres high in places. In the direct vicinity of the hill forts there are often BURIAL MOUNDS – heaps of large round stones under which powerful individuals of the time were buried in burial chests made of stone slabs. Most have been dug up and their graves plundered, but they can still be discerned in places, like in the area of the hamlet of Ljubotić above Tribanj-Kruščica.

CHURCH OF THE MOTHER OF GOD AT VELIKO RUJNO

At Veliko Rujno, the largest plateau on Velebit, at 900 metres above sea level overlooking Starigrad-Paklenica, we find the ruins of the old and the new Church of the Mother of God.In the past, the local inhabitants lived predominantly from cattle breeding, and spent most of the year in distant Velebit hamlets taking their cattle out to graze. This is why this small church was built so high in the mountains. Over time, the church became too small for all of the people of the Starigrad area. In 1930, thanks to the dedication of the legendary Starigrad priest and alpinist Don Ante Adžija, the people built a new church right next to it, using all of the masonry of the old church.

And although the way of life in this region has changed, as the inhabitants moved to the coast in the 1960s and dedicated their efforts to tourism, the tradition of making a pilgrimage to the Church of the Mother of God on the Feast of the Assumption of the Virgin Mary, every August 15 remains. And so, every year, a large number of pilgrims make their way up the mountain trail to Veliko Rujno, where a magnificent procession is held after a festive holy mass in the Church of the Mother of God.

On that day every household prepares a special meal and invites their relatives and friends to be their guests, and a grand festival known as the Bikarija is held in the evening hours on the central Starigrad waterfront.