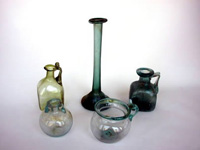 It is a poorly known fact that today’s Starigrad-Paklenica emerged from the foundations of the ancient Roman city of Argyruntum. However, in his work Naturalis historia, Pliny the Elder (Caius Plinius Secundus) included Argyruntum on the list of municipia, which implied that the citizens of the settlement were granted Roman rights.

The city was located on a small 3.5 hectare peninsula and was surrounded by city walls, clearly seen in one epigraphic monument.

The monument reveals that Argyruntum was granted the title of a municipium during the reign of Emperor Tiberius (31-35 A.D.). Like Zadar, Poreč and other cities dating back to the Early Imperial period, it is believed that there was a straight grid of streets (cardus and decumanus) within the walls. Along the main road leading to the entrance of the city was the "city of the dead" – the cemetery. Investigation of the Roman necropoli has offered many testaments of the high cultural and civilization level of the town’s citizens. The ashes of the cremated were placed in glass, stone or ceramic urns, and, as was the tradition throughout the Roman Empire, various items were placed next to the urns as offerings for the deceased to carry them over "to the other side". This is how various glass and ceramic dishes, bone, metal and amber jewellery, oil lanterns, and tools were discovered. The amber jewellery is deserving of special mention – from simple pearls to rings with female portraits and richly decorated boxes, as well as a large number of oil lanterns – lucernes.

The most interesting find is certainly the collection of Roman glass – 146 dishes of various shapes (bowls, glasses, bottles).

Based on the research and discoveries to date, it can be said that Starigrad-Paklenica survived the era of antiquity in the full glory of the Roman Empire. The collection of Roman glass is on exhibit at the Zadar Archaeology Museum.