At the beginning of May each year National Park Paklenica becomes the place of traditional climbers and hikers meeting. Beside Big Wall Speed Climbing - world unique climbing competiton as the central event, there will be climbing competitons for kids "VIII Kid`s Speed Paklenica", climbing marathon "Paklenica - from dawn to dusk", outdoor film festival, lectures, concerts, etc.. Join the adventure! www.paklenica.hr 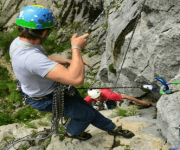 Passion for nature and love for running is the major force of Paklenica Trail mountain running race that in 2015. gets a new look and a new race category. So far, Trail race had three categories (jogging, light and ultra) but this year there will be: "Pjeskarica" (15km, 400+asl) - named by Velebit stenoendemic plant that is growing in the gorges of Velika and Mala Paklenica Canyons and nowhere else in the world; "Three Canyons" (40km, 2200+asl) leads you through the most attractive parts of National park Paklenica and exceeds over three canyons and "Absolute Paklenica" (14km, 1810m+asl) vertical race that starts on the sea coast and leads you by the most directly route to the second highest top of mountain Velebit, Sv. Brdo (1757m/asl). Info & Reservations: http://www.mt-croatia.com/paklenica-trail-en.html

Velebit Ultra Trail 2015 - The longest day edition: from Dawn to Dusk. The Velebit Ultra Trail is a race that every serious trail runner has to include in his or her sporting biography. The way to the finish of this Spartan race is not easy: in 65 km of this trail and 5.000m of climb, besides a few mountain shelters, competitors will not encounter any form of civilization and will have to rely on their own skills to challenge this incredible mountain. On the way, through well established and marked Velebit pathways, competitors will pass from sea level to peaks of 1800m, being exposed to great challenges, but also to beautiful views, as every kilometer of Velebit is a story for itself. Therefore, regardless of the difficulties, any pain or fatigue will be alleviated by unforgettable views at a dozen Adriatic islands. Info & registration: http://www.outdoor.hr/velebit-ultra-trail-eng

The fair of local products with entertaiment programm

Annual celebration of Victory and Homeland Thanksigiving Day which is a public holiday in Croatia, held as a memorial to its War of Independence 1991.-1995.

Traditional pilgrimage on the Veliko Rujno, the biggest platou on the Velebit mountain. Popular festivity in the evening by the sea(concerts, gastro offer, firework).

Back to - CALENDAR OF EVENTS
LAST MINUTE