This year the solemn Eucharistic celebration led by the archbishop of Zadar Zelimir Puljic, followed by a cultural program of traditional folklore and "Podgorac".

All the numerous lovers of the mountain where the Paklenica and Velebit has become a second home is expected jubilee 10.edition adventure racing trekking through the Velebit 23.-24th of June.
www.paklenica.hr 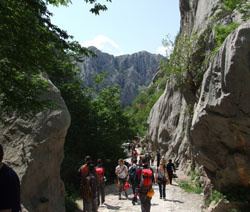 Paklenica is richer this year for another adventure event. With the thirteenth meeting of climbers Paklenica 2012th which is traditionally held during the first of May holidays, the 1.May I will be trekking 1.edition Paklenica half marathon. All participants will also be support for climbers who will compete in the same day for the famous "Big Wall Speed ​​Climbing" competition in speed climbing big rocks.
www.adventurerace.hr

During four days showing the audience will have the opportunity to see five of the most successful musical documentaries shown on 2.Starigrad Paklenica Film Festival, an international music festival of documentary film from 2010 held in Starigrad-Paklenica.
www.spff.hr 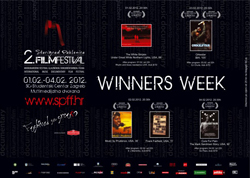 TZO Starigrad and NP Paklenica participated in late April in the work of the first tourist exchange ADRIA Natour held in Croatia. It is an international tourist exchanges specializing in the active leisure. On this occasion, your offer of active holidays presented 25 exhibitors from Croatian, Slovenia and Montenegro. On the other hand, their interest was expressed for the proposed twenty tour of several European countries (Germany, Italy, Belgium, France, Sweden, Romania and Greece).

As part of this year's Day of the Zadar County Tourist Board and the organization Starigrad in Starigrad-Paklenica monograph presents the animated movie Miriam.

Back to - CALENDAR OF EVENTS
LAST MINUTE